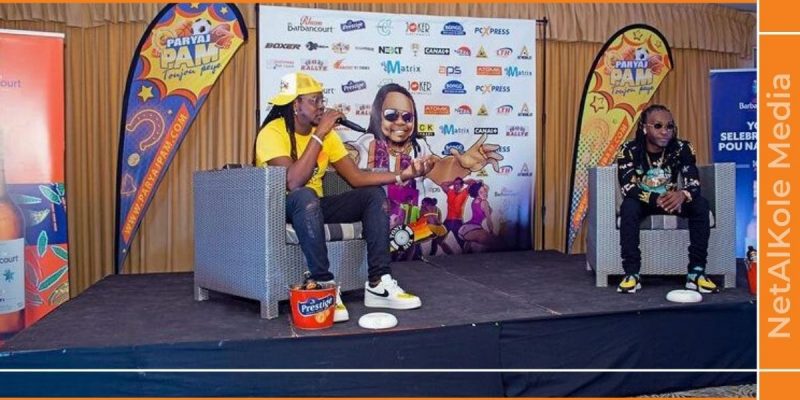 As announced, Tony mix, nicknamed DJ peyi a, gave a press conference at the NH El Rancho hotel, this Friday, March 25, to present his new mixtape which will be released next Sunday. Many were the journalists present at this event during which the DJ made several revelations.

The conference started from 5 PM. Without much speech, Tony mix and T-Babas took their places and announced that they were ready to answer questions regarding the new mixtape for which Tony announced a release date for almost three weeks.

For the title, Doub pakin, Tony Mix informs that these two words, which were initially a slogan, came to him one morning when he woke up. Always in search of creativity, when these words already had a definition, he chose to assign them another. During a performance at House of beer, it was really going to take shape when the DJ launched several times "mennaj ou la, madanm ou la" and a fan did not stop responding with ardor "his rele double pakin''.

Shortly after, the video of a snippet of this performance hit the web and many fans liked it. Tony chose this slogan as the title of his new mixtape which lasts more than seventy minutes because he believes that it is the one that the public has appreciated the most in recent months.

During the conference, he explained that it is time for him to encourage young people to take the noble path and that he did not feel the need to do too much chatter on this mixtape, which is his umpteenth. . He also revealed that this will be his last on this form. He has no competition, he believes.

On the other hand, Tony Mix promises to introduce students to the public from next year; Young people who can replace him when he retires and who will inherit the colossal work he has accomplished. Moreover, he believes himself to be a victim of his country. “Parapò ak potansyalite m, mt ap pi lwen si m te nan yon lòt peyi. M te ka gen menm respè ak nan menm nivo ak Rick Ross ak DJ Khaled”, regrets the DJ who invites the public to better promote local artists.

Contrary to usual, Tony Mix did not choose to make a signature sale for "Doub pakin". He made this choice because the sponsors bring him enough money and he feels that the public has not seen the current situation in the country. He therefore invites the public to wait until Sunday, April 27 to obtain the mixtape for free, which will be available on practically all platforms, from noon.

Follow the press conference given by Tony Mix in full by clicking on this link:

Poems and love letters from rapper 2pac up for auction

At the Oscars, Chris Rock jokes about Jada's hairstyle, Will Smith slaps him