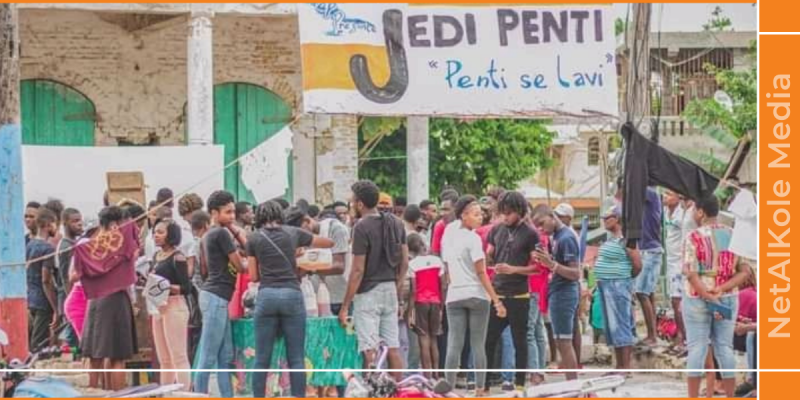 Once again, painting lovers have a date with this great art. The fourth edition of "Jedi penti" will be held on March 30 and 31, 2022, from 2 a.m. to 5 p.m., at the Champ-de-Mars. After 3 first successful editions, Wysmy Faustin, initiator of this activity which makes it possible to establish a firm interconnection between the painters, wants to continue to bring this art to the most deprived. For this edition, he has the support of the painter Mèg Black, the poet Ricardo Boucher and Domini Resain.

"Jedi penti is a cultural activity organized in Haiti in different areas around painting, while having other artistic varieties such as poetry, musical performances, drum show and engaged music among others," informed Wismy Faustin, the principal organizer of the activity, to our editorial staff.

On the other hand, Jedi penti is a pretext for Wismy to democratize painting in the country. The goal is to bring this art to the most underprivileged circles, those that the State deems are not worthy of this kind of activity, he says. “Long before the 17th century, painting activities were seen as an elite thing. Nowadays, it is often reserved for the middle class,” he added.

Through this activity, Wismy intends to shine the spotlight on the colossal work carried out by painters in a country like Haiti where the conditions are more than difficult. As a painter, he says he witnesses the social undervaluation suffered by his peers. This situation is abnormal because an artist is a messenger, an icon for society, according to him. He wants the country to have a different look on painters and contributes to this effect with Jedi penti, which is the only national cultural activity where street painting is highlighted.

During the first day, a training workshop will be led by three trainers Olrich Exantus, visual arts teacher at ENARTS, Charles Eronaldo, painter and student at IERAH and Ricardo Boucher, poet and presenter of the program "La Poésie", around from the theme “Enpòtans atizay nan konstriksyon moun”.

On the menu of the second day, there will be an exhibition of works of art and painting sessions on the jerseys of the participants. Cherry on the cake, there will be a musical atmosphere with Rebèl Pakamò, Waya Vodou Flit and others, then a poetic recital with Ricardo Boucher.

“I am always delighted to participate in Jedi penti which is one of the most open activities for people to fully enjoy painting in a single day. This activity has the particularity of causing a very strong feeling of impatience in me, out of a desire to see the happiness that is drawn on people's faces when I draw on their shirts, their faces or on their bodies", informed us, for her part, Mèg Black.

The first three editions were organized in one day. The first was organized on August 5, 2021, in Petit-Goâve, the city of origin of the initiator of the project, which is close to his heart. The second, at Delmas 24, on November 29, 2021, at the painter Mèg Black, and the third was organized on December 9, at Delmas 75, on the Place de Fragneauville; this edition was adopted by Kawo lawouze.

The 4th edition will be even grander according to Wismy. This is why it will be organized in 2 days at the Champ-de-Mars, on the square built in honor of the father of the nation, Jean Jacques Dessallines; where many painters practice and a good number of longshoremen live. The latter, who do not have the possibility of going to the places where painting is honored, will have the possibility of taking part, this time.

The choice of Champs-de-Mars as the main location was also made because Jedi penti remains a battle; that for the promotion of painters and the democratization of painting. The initiator firmly believes that organizing it at the foot of Emperor Dessallines, this great fighter, is of capital importance. In the activity, he wants to convey the energy that resides in this place for its artistic, historical and spiritual attractions. “There is no painting without spirituality,” says Wismy.

Like the first 3 editions, to organize this 4th edition, Wismy Faustin can only count on the human resources available to Jedi Penti and will have to draw on its funds for the economic part, but he does not intend to give up. The appointment for this great activity which aims to create a certain close link between painters and the general public is therefore given for next March 30 and 31.